Root Rescue began a grant-in-aid research program with the University of Guelph in the spring of 2009. The Transplanter MS-CS efficacy trials were conducted and supervised under a research authorization issued by the CFIA. The trial data showed that Transplanter MS-CS improves the Water Potential of treated plants - reducing stress, and allowing plants to successfully establish on a new site. 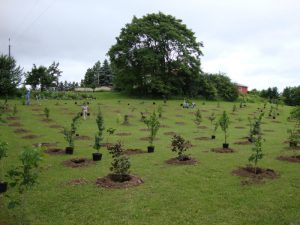 Our research program began in the spring of 2009. A team from the University of Guelph (initially under the supervision of Professor Youbin Zheng, and later Professor Mike Dixon) designed and monitored the systematic testing of Root Rescue's new Transplanter MS-CS formulation. By design, the only variable in this trial (and all of the trials in subsequent years) was the inoculation of the roots of test group plants with the Transplanter MS -CS solution of mycorrhiza and biostimulants. Simply put, 1/2 of the test trees were inoculated with the Transplanter MS-CS solution at the time of planting, and the control trees were simply watered with the same amount of plain water. To preserve the integrity of the testing, whenever drought conditions prevailed, both test and control trees were watered with the same amount of water. The planting process did not involve the use of any media imported to the test sites - the backfill used to plant the trees was made using the topsoil displaced as the planting holes were dug. Thousands of trees were lined-out and tested in this manner on 5 different sites in Guelph, Puslinch, Linden, Dundas and King township from 2009 through 2012.

Root Rescue would like to thank the Industry Partners who provided the materials and resources that made this testing possible. Many of these companies have continued to support Root Rescue's testing programs and further research programs into water conservation and other initiatives after these initial trials were completed. 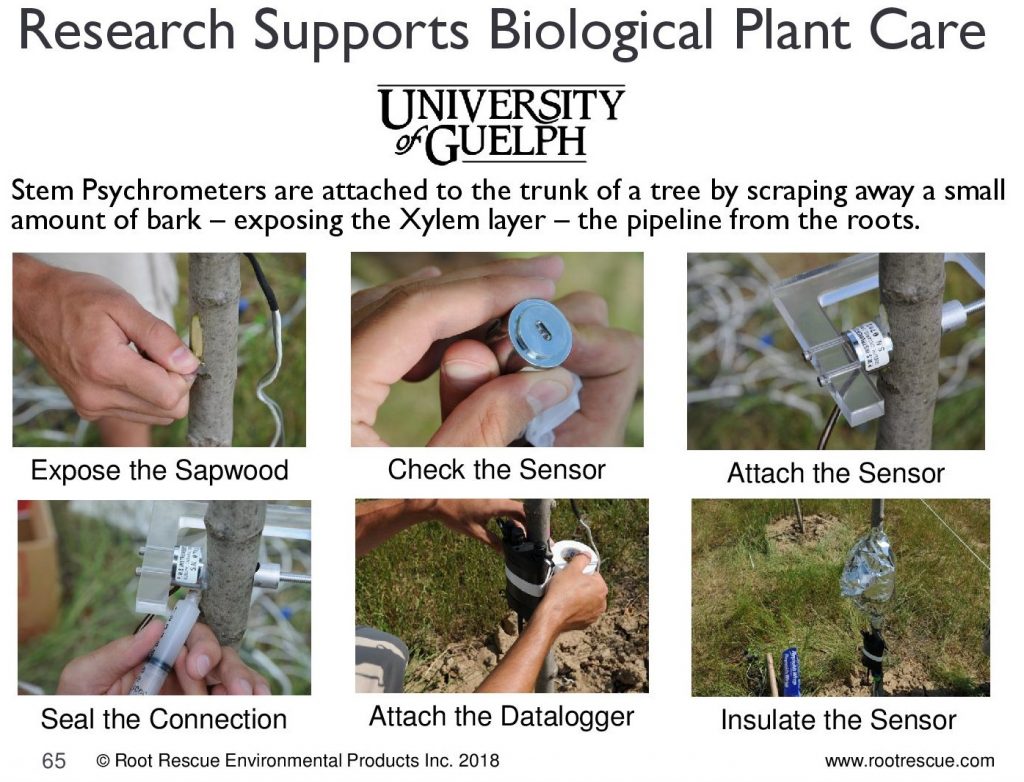 By August of 2009, a newly improved technology was introduced to the Transplanter MS-CS efficacy testing program: Stem Psychrometers

By August of 2009, Professor Mike Dixon from the University of Guelph joined the research team and introduced a newly upgraded technology to the data gathering protocol. Stem psychrometers have been used in laboratory settings for 30 years to assess the in-situ, real-time water status (stress levels) of plants. Recent innovations by ICT International of Australia have allowed this laboratory tool to be used in non-controlled outdoor settings. ICT's new datalogger added compact data recording and wireless communication abilities to this valuable analytical tool. Now you can take stem psychrometers on the road - so that's what the research team did (with ICT's invaluable help).

We will be presenting the results of the 4 years of Transplanter MS-CS efficacy testing conducted by the University of Guelph team in several ways. Here, for example, a report on the University's methodology and findings in a peer-reviewed publication (Acta Horticulturae) from 2015.

You can also play this narrated PowerPoint which walks you
through the U of G's research findings.